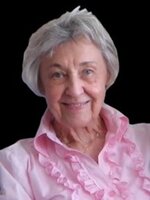 Ruth Morrison (Felton) Richmond passed away May 29, 2022 in Allen, Texas at the age of 101. She was born to Ernest Felton and Edith Audrey (Brown) Morrison on November 22, 1920 in Chattanooga, Tennessee. Ruth is survived by her sons, Father Bates Carleton Richmond and his wife Sherry of McKinney, Texas and Robert Morrison Richmond and his wife, Martha, of Palm Springs, California; granddaughter, Brittany Dursi and husband, Joe of Long Island, New York; granddaughter, Elizabeth Waters and husband, Cliff of Denver, Colorado; granddaughter, Shauna Gernon of Round Rock, Texas; grandson Steven Gernon of Cedar Park, Texas; great grandchildren, Claire and William Dursi, and Cody and Wesley Waters; and nephew, Charles Mead Roberts of Miami, Florida. She was preceded in death by her parents, her husband, Robert L. Richmond in 2015, and her sister, Elizabeth Morrison Roberts in 2018. Ruth grew up in the historic district of St Elmo in the house next door to the St Elmo Fire Hall where her father was a fireman. She attended City High School and after graduation, she became the Society Reporter for the local hometown newspaper which is now the Chattanooga Times Free Press. Her assignment for the newspaper was to cover the U.S.O. which led Ruth to meet her soon-to-be husband. They had a military wedding in 1943 while Robert was stationed at Ft Lewis Washington. They remained married for the rest of their lives. In addition to her love of family, Ruth possessed insatiable curiosity, was an avid reader, enjoyed travel, bridge and hosting parties. One thing about living beyond 100-years: applying sunscreen or assigning place settings was no longer fun to Ruth. Passing along opinions to her children, her caregivers and anyone who'd listen was entertainment enough. Funeral services are private and there are no calling hours. Arrangements by Wann Funeral and Cremation Center, Chattanooga, TN (423)821-7551. Please visit www.wannfuneralhome.com to share memories, photos and condolences.