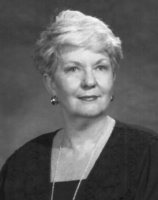 Callie Esther Sweeton Hamm, 86, of Lookout Mountain, Georgia, completed her earthly journey and joined the heavenly host on April 5. Esther was born in Long Beach, California. She was an accomplished musician, and in her youth was part of a vocal trio which enjoyed performing for Christian ministries. While attending college in Siloam Springs, Arkansas, Esther met the love of her life, John Hamm, and they were married in 1953. The family came to Lookout Mountain when John accepted a teaching position at Covenant College in 1964. Esther established a piano studio in her home, where she taught aspiring young pianists for many years. She also worked as a legal secretary for several Chattanooga law firms. In 1985, Esther co-founded the Choral Arts Society (Choral Arts of Chattanooga) with her husband and devoted years to the organization. Known for her gift of hospitality, Esther enjoyed hosting Covenant College students, faculty, and staff and others in the Chattanooga community. In addition to her husband of 66 years, Esther is survived by her daughters Rebecca Hamm, Kristine Hamm, and Gretchen Hanks (Brian); six grandchildren and four great-grandchildren. Esther will be greatly missed by her family and friends, and the many students whose lives she touched. She was preceded in death by her parents Clyde and Geneva Sweeton, brothers James, Jack and Paul Sweeton, and an infant son. John and Esther are members of Lookout Mountain Presbyterian Church. There will be a private burial with a memorial service to follow at a later date. Arrangements by Wann Funeral Home. To Share memories or condolences please visit www.wannfuneralhom.com.